AECI delegates recently had a very successful meeting with Minister Simon Harris in relation to SOLAS and the major backlog of courses for apprentices which has caused major problems for employers. This meeting was organised by our President Colm Walsh.  Fine Gael Councillor Ray McAdam was also present at the meeting.  Minister Harris has promised to see that AECI have a representative with SOLAS and will be keeping the pressure on SOLAS to release roadblocks and get apprentices back on course.
See below encouraging press release.
26 March 2021
Minister Harris and Minister Collins announce €20 million capital funding to expand apprenticeship provision across further and higher education
Funding is aimed at increasing the capacity to deliver off-the-job training in craft apprenticeship across the country
Minister for Further and Higher Education, Research, Innovation and Science Simon Harris TD and Minister of State for Skills and Further Education Niall Collins TD have today (Friday) announced the roll-out of €20 million in capital funding to respond to the growing demand for apprenticeships.
The funding will allow for a significant expansion in electrical, plumbing and carpentry places, and additional COVID-19-related capacity in electrical, plumbing, hairdressing and pipefitting places.
Minister Harris said: “Today’s investment of €20 million, to be provided via SOLAS and the Higher Education Authority (HEA), will fund the delivery of almost 4,000 additional craft apprentice places annually across further and higher education – helping to catch up on the lost provision in 2020, and to support the target increase of 1,450 registrations across all apprenticeships in 2021.
“This investment reaffirms the Government’s strong commitment to enhancing and expanding the apprenticeship system. Access to cutting edge equipment is key to positioning apprenticeships as a valued and attractive path to sought-after qualifications. A strong pipeline of craft apprentices is also critical in sustaining the construction sector and delivering on our ambitious national infrastructure plans.”
“The Government will shortly consider a new Action Plan for Apprenticeships. It will set out new ways of structuring, funding and promoting apprenticeships, with a target of 10,000 new apprenticeship registrations per year by 2025. This compares with a 2019 registration figure of 6,177. We have huge ambitions in this area.”
Minister Collins said: “As with other parts of our education and training system, the apprenticeship system experienced significant disruption due to the COVID-19 pandemic. By supporting additional apprenticeship places, the investment announced today will go some way towards mitigating the impacts of the pandemic, including requirements for smaller class sizes due to social distancing, and will also facilitate expansion for the longer term.”
“The forthcoming Action Plan will set out to place apprenticeships at the centre of the education and training system, increase the attractiveness of the programme to employers and learners of all ages, and ensure that the apprentice population is reflective of the general workforce in respect of diversity as well.”
The expansion of the national apprenticeship system has been a key Government priority since 2016.
Craft apprenticeship is currently being delivered using blended learning, due to the extended Level 5 restrictions; however, a phased return to onsite training has begun in recent weeks.
The €20m will be allocated by SOLAS and the HEA across Education and Training Boards (ETBs), Institutes of Technology and Technological Universities.
ENDS
Notes to the Editor
SOLAS and the HEA will each be allocated €10m in 2021 for apprenticeship capital investment. SOLAS and the HEA will determine how the funding will be allocated across apprenticeship programmes and providers. However, the immediate focus will be on expansion of capacity in the areas of electrical and plumbing.
Apprenticeship programme
Apprenticeship is a programme of structured education and training which formally combines and alternates learning in the workplace with learning in an education and training institution. An apprenticeship prepares participants for a specific occupation and leads to a qualification on the National Framework of Qualifications.
Phase 2 off-the-job training is provided by the ETBs, under the oversight of SOLAS, with Phases 4 and 6 delivered by the Technological Universities/Institutes of Technology, under the oversight of the HEA. .
As of 31 January 2021, 19,773 apprentices are in training, employed by over 7,200 employers on 60 different apprenticeship programmes.
__
Press Office
An Roinn Breisoideachais agus Ardoideachais, Taighde, Nuálaíochta agus Eolaíochta
Department of Further and Higher Education, Research, Innovation and Science
Sráid Maoilbhríde, Baile Átha Cliath, D01 RC96.
Marlborough Street, Dublin, D01 RC96.
__
www.gov.ie @DeptofFHed
April 12, 2021/by Clodagh
http://aec-ireland.com/wp-content/uploads/2017/06/aecilogonew1.jpg 0 0 Clodagh http://aec-ireland.com/wp-content/uploads/2017/06/aecilogonew1.jpg Clodagh2021-04-12 13:25:482021-04-16 13:44:37AECI delegates recent successful meeting with Minister Simon Harris

This is a follow up to our email to you last Friday. Apprentices are a priority group in education over the coming weeks. This week, over 250 craft apprentices returned to ETB Training Centres around the country to complete their off-the-job training. Further groups of craft apprentices are due to return this month on a phased basis to ETB Training Centres, Institutes of Technology and Technological Universities. Detailed planning on return is happening in order to enable all craft apprentices currently on off-the-job training to complete their phase as soon as possible. A phased return is essential to reduce the risk while the Covid-19 virus is still in the community and the vaccination programme is still at an early stage.

Some apprentices will have heard from their craft apprenticeship training provider and SOLAS on when they are scheduled to return onsite to complete practical training and assessment. If you have not already heard, you will be informed as soon as the information is available.

On behalf of SOLAS, HEA and all of the training providers thank you once again for your patience and resilience during this difficult time. We will be in contact again next week.

This is a follow up to our email to you last Friday. Apprentices are a priority group in education over the coming weeks. This week, over 250 craft apprentices returned to ETB Training Centres around the country to complete their off-the-job training. Further groups of craft apprentices are due to return this month on a phased basis to ETB Training Centres, Institutes of Technology and Technological Universities. Detailed planning on return is in train in order to enable all craft apprentices to complete their phase of training and return to the workplace as soon as possible. In line with the public health guidelines, a phased return is essential to reduce the risk while the Covid-19 virus is still in the community and the vaccination programme is still at an early stage.

From next week onwards we will be contacting employers on when apprentices are scheduled to complete their training and return to the workplace.

We know that delayed return of your apprentice(s) to the workplace is problematic for you and we appreciate your understanding and patience over the coming weeks while affected apprentices complete their current phase of training. Thank you for your support.

The Executive Council would like to see as many Members attending as possible.  Login details have been sent by email to all Members.

Over the coming weeks, and in line with the Level 5 guidance for further and higher education it is planned to have a phased return of craft apprentices to Training Centres, Institutes of Technology and Technological Universities to complete essential practical elements of Phase 2, 4 and 6 training and assessment. A phased return will help ensure the safe return of apprentices, instructors, lecturers, support staff, and the wider community in line with public health guidelines.

Within further education and training, 251 Phase 2 apprentices with the most significant time-critical status are returning to complete essential practical training on Monday 01 March. Detailed work with stakeholder representatives on the phasing of return of subsequent groups of craft apprentices across Phases 2, 4 and 6 is underway. The process of phased return will be monitored on a continuous basis over the coming weeks to help ensure ongoing public health safety.

We would be grateful if you can share this update with all relevant colleagues. Apprentices are being informed of the phased return plans and will be advised that their training provider and SOLAS will be in contact with them to confirm the date of return that applies to them. Due to the phased approach apprentices’ training phase will finish some weeks later than originally planned.  Off-the-job training allowance will continue to be paid and employers will be informed.

We would like to thank you and colleagues again for all of your hard work this term in very difficult circumstances. We look forward to working with you over the coming weeks to support craft apprentices to complete their current phase of training.

At a vital Supreme Court hearing for the future of sectoral wage bargaining, it was argued by the State that applying minimum pay and conditions across a sector is consistent with European social policy.

The State is appealing a High Court ruling that struck out the part of the 2015 Industrial Relations (Amendment) Act that underpins Sectoral Employment Orders (SEOs).

He said that many other EU countries provided for sectoral pay and conditions and under the Posted Workers’ Directive, workers posted from one EU member state to another had to be paid the sectoral wages for the state in which they were working.

The State was also represented by Oisín Quinn SC and Eoin Carolan SC and they were instructed by John Boyle of the Chief State Solicitor’s Office.

The AECI – Annual General Meeting (AGM), will take place virtually this year on Saturday 6th March 2021 at 11am.

The Executive Council would like to see as many Members attending as possible.

We will be sending out the appropriate details in advance.

One course is approx 3.5 hours in duration and is in-house face to face.

Another course is online and is more in depth.

Please contact us for details should either be of interest to you.

The impact of the above is that the electrical SEO is no longer legally binding.  However, the construction and mechanical SEOs remain in place and are, therefore, fully operational.  The granting of a stay by the High Court means that construction workers have a legal entitlement to an increase in pay and pensions of 2.7% on 1st October next.

As you are already aware, the Coronavirus (COVID-19) pandemic has meant that it’s now vital to limit social contact and avoid gatherings.

For that reason, we’ve made the difficult decision to postpone our annual Electrical Trade Show 2020.   While we know this is disappointing,

we hope you can understand the steps we are taking to help keep our staff, exhibitors and attendees safe and help prevent the further spread of the virus.

We have changed the date to Wednesday 24th February 2021 in the same venue, The Lucan Spa Hotel Co. Dublin.

Choosing to postpone our event was a difficult decision, especially when we have put time and effort into the planning and promotion.

However, by doing so, we will be keeping our attendees safe, helping to flatten the curve of the pandemic, and affecting positive change.

While this may cause some inconvenience in the short term, we can work on making our 2021 Electrical Trade Show our best one yet.

Thank you for your patience and support and for your understanding during these unprecedented times and we  will keep you updated as we receive further instructions / guidelines from the government / HSE.

We are delighted to inform you that The Electrical Trade Show 2020 will take place on Wednesday 2nd September 2020 in full compliance with COVID-19 government guidelines.

As Citywest Hotel is now a self-isolation facility for COVID-19 patients we are hosting our annual trade show this year at the smaller venue of the Lucan Spa Hotel, Dublin.

We believe this event will afford us the opportunity to once again ‘rub shoulders’  together, while social distancing and return to positively celebrate the best our industry has to offer.

We are not by any means ignoring the severity of the current COVID-19 situation, but we have to stay positive and our Trade Show has a role to play in this.  A variety of seminars will be held throughout the day on various topics.  We look forward to welcoming you there. 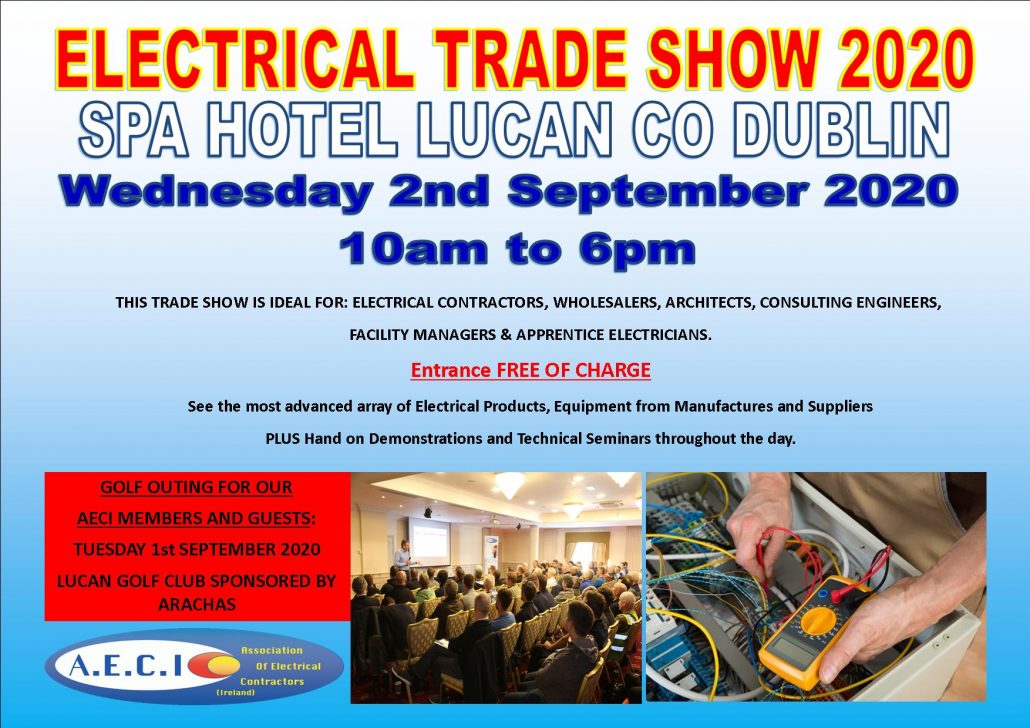